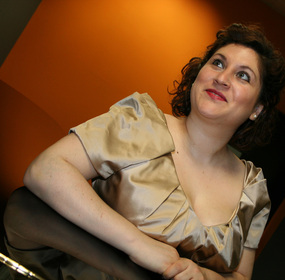 Serena regularly performs with her three-time IABS Gold Champion Quartet Guys & Dolls who were also Bronze International Champions at SABS. Guys & Dolls have performed all over Ireland and have headlined as special guests with Cork Festival for four years running. Serena is a member of the MusiCorum Choir, singing Soprano 1, directed by Musical Director Geoffrey Spratt. She sings in the Cork Opera House and in the Everyman Theatre regularly as Soprano 1. Serena has also sung with the Voice Effects Choir and Cork Youth Orchestra Chorus for the Cork Proms. Serena was a member of the award-winning Voci Nuove Choir who went on to win Ireland's Choir of the Year. Serena was 1st Soprano in the premier concert performance of Deidre & the Sons of Usna by John O'Brien and sang in Cork Operatic Society's concert perfomances of The Merry Widow, and the critically acclaimed productions of Faust and Marschner's Der Vampyr at the Everyman Theater. She has sung many times with the Cork Operatic Society for their Annual Christmas Concert and was a featured Soloist at the Cork Choral Festival Christmas Concert in St. Finbarre's Catherdral. She has studied several roles and performed in Opera Scenes from Die Zauberflöte, Ariadne auf Naxos, La bohéme, La finta Giardiniera, The Medium, and various other operas and was in the University of Redlands Opera Chorus for productions of Bellini’s Norma, Purcell’s Dido and Aeneas, and the debut of Pinkerton’s Opera for Children, The Blue Moose.

Serena has studied with top-notch vocal teachers and coaches including Mary MacSweeney, Dr. Melissa Tosh, Leroy Kromm, Leesa Dahl, and Traci Tornquist. She has had the privilege of being selected to participate in several Master Classes with teachers and artists from around the world including the famous Baroque Soprano Emma Kirkby. She has most recently taken part in the Opera Programme Berlin Vocal Education Seminar in summer 2020, and was a vocalist at the first ever NEO Voice Exploratorio Festival in Los Angeles, California in the summer of 2019.Serena is the recipient of various scholarships and awards including a Society for Renaissance Studies Student Bursary, a Society for Musicology in Ireland Grant, University of Redlands Talent and Academic Scholarships, a Presidential Scholarship, Margaret Sturtevant Talent Award, and a four-year NUMMI Academic Scholarship.

Serena began piano at age 8 and studied with the well-known Californian piano teacher, Barbara Solbalvarro throughout her youth.
She continued her piano studies at the University of Redlands with the renowned Romanian pianist and organist Dr. Angelica Prodan who studied performance at the Gheorghe Dima Conservatory in Cluj-Napoca before coming to the United States.

Serena is the Music & Drama Director of Rockboro Primary School. She has developed all of the Music Education courses and arranges, directs, and accompanies all of the plays. She also founded and directs the junior choirs and glee clubs. Past teaching experience includes creating and teaching a brand new ‘Introduction to Singing Course’ at Bishopstown Community School in autumn 2012 which was met with great success. So much so, that Serena devised an ‘Intermediate Singing Course’ and enjoyed teaching both courses in Bishopstown and the surrounding areas. Her ‘Introduction to Singing Course’ launched in Spring 2013 in Ballincollig Community School where record numbers of students enrolled! She was also the Vocal Instructor and Glee Club Director in the Mitchelstown School of Music and Arts for three years.